A CREW… A STUDIO… AND NO PROJECT…. THE CAR ADVERT 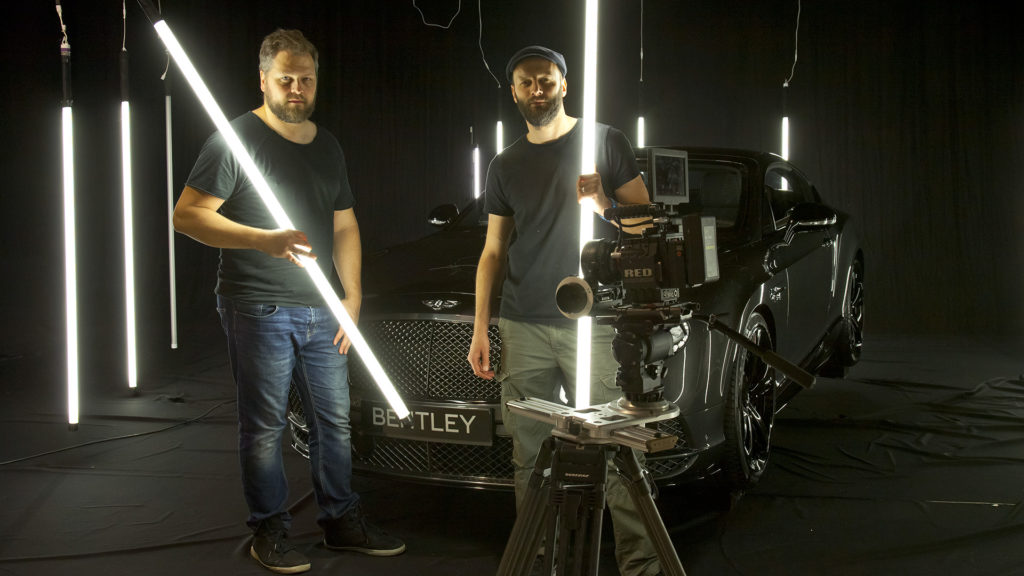 As a business we chose to work with South Cheshire college to give the students a great opportunity to work with us on a professional hi-end piece of work that would give them a taste of a genuine shoot and enable them to work with a talented crew and industry standard equipment.
An experience that would benefit their careers later in life.
Bentley were happy to be involved on that basis purely to facilitate this for the college and strengthen their already good ties with them and help out their students to have this experience. This aside, the spec commercial created was not produced, commissioned or endorsed by Bentley in any way.

My DOP friend, Mike Staniforth and I met in a cafe in Morton, Manchester when he told me we had a large studio for a freebie if we needed it.  We had a crew lined up ready to work on something, my Red was available. It was a dream scenario but we had no idea what we could shoot….
Both of us had wanted to work on a car spec commercial for sometime so that seemed like the obvious plan. Justin at Big Shed had offered us his facility for a weekend as long as we could make something out of it. He had also recently purchased a motorised rotating car turntable.

Ok… so we would make the car spin…. 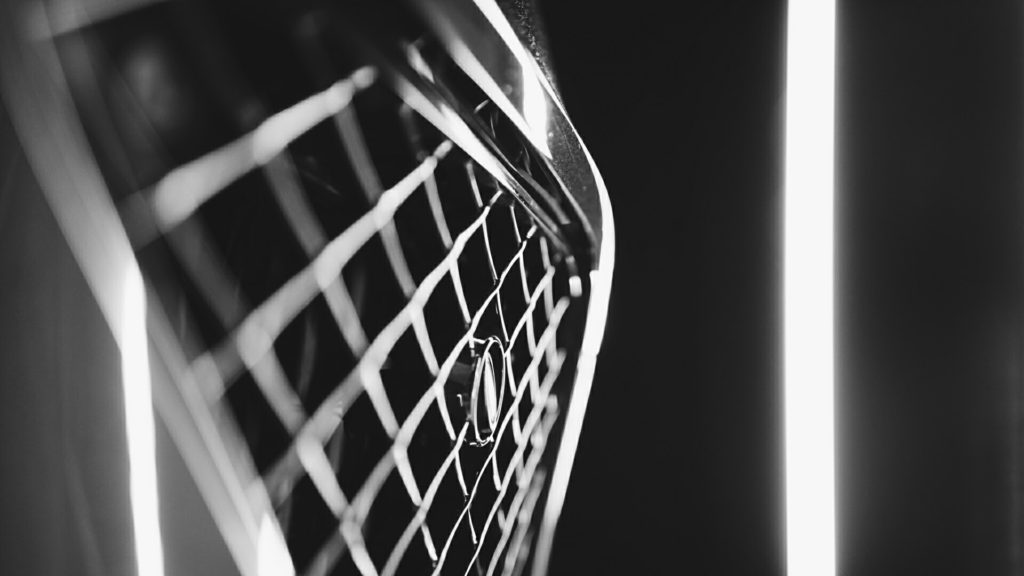 Mike and I met up at Big Shed with Justin Windle to check out the studio space where we used a fifteen foot long poly board on a rotating stand to simulate the car and how much space we would have to give between the car and the lights without them basing into each other, originally we planned to let the car only spin 90 degrees in any direction and then stop it; that way we could have a star configuration for the lights and the car wouldn’t hit anything.
Justin informed us though that the turntable didn’t stop instantly and that plan would be way more trouble than it was worth so we instead opted for a circular array of the lights which when seen on a flat horizontal plane would look randomized at any angle.

Mike had recently formed a relationship with Quasar science LLC for their quasar tubes; multi length LED light tubes. We decided we would hang these around the vehicle in a forest of these Quasar lights.
Then we ran into problem #1: these lights only emitted out of half the circumference of the tube the rear half of the cylinder was solid state electronics and batteries, there were 360 degree versions but they weren’t ‘earthed’ for the UK…
…We needed another option. 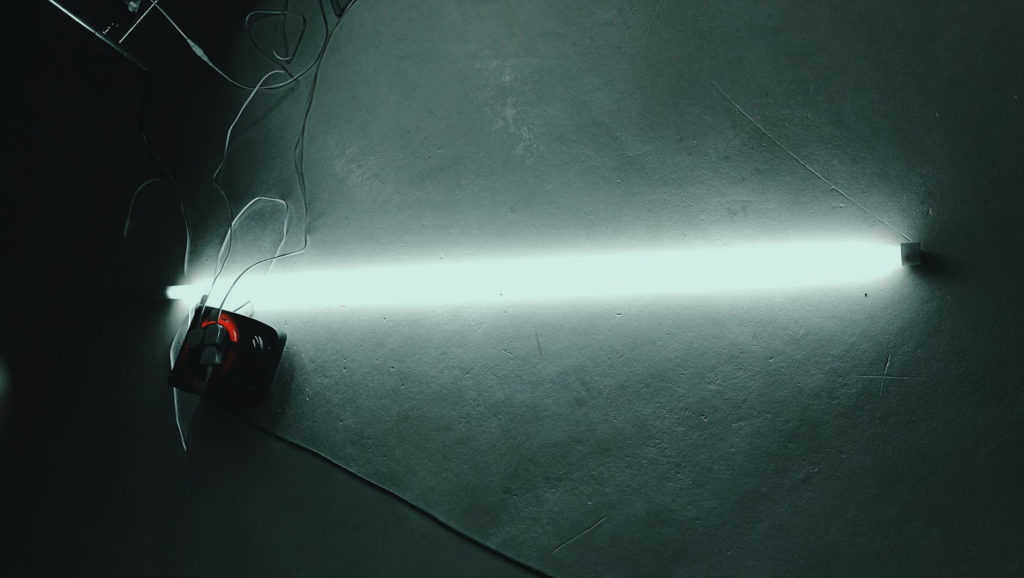 Encapsulites weren’t dimmable or able to adjust their colour temperature like the Quasars but they were 360 and a very good price per unit, we ordered 6 with Justin’s four and two more hired from Purple crew. With a glossy vehicle we would get fantastic reflections in the bodywork, very ‘Tron’ like.
My plan was in post to create mirror and kaleidoscope effects with the shots so the vehicle looked like it was emerging from a strange metal singularity and that was the concept; The singularity – an infinite point of infinite complexity.

I’ve been connected with SCC for some time now since my friend Katie began working in their media department as a tutor. I remember when I was still struggling to get into the industry how few opportunities there were to get actual genuine set experience on anything outside TV shows. Katie mentioned about giving students some work experience a while back and finally I could offer something that was more than fetching and carrying tea on a soap opera episode; this would be a slick glossy production and we would be giving them genuine technical roles and show them the day to day workings of a shoot.
We decided to make them Camera Assistants on the Red Epic Dragon system; helping Leighton Cox our first Assistant Camera with lens changes assembling camera setups and dollys and also helping capture some behind the scenes pieces.

SCC loved the idea and saw this as a great opportunity. They were thrilled their students would be working on something with a little gravitas. Also, they would be able to show the upcoming students the kinds of productions that awaited them with some of their own actually involved.
We were introduced to Amelia and Flick, two enthusiastic and helpful students from the media department who were thrilled to be there and offered a great deal of help.

ALL DRESSED UP AND NOTHING TO DRIVE… ENTER BENTLEY 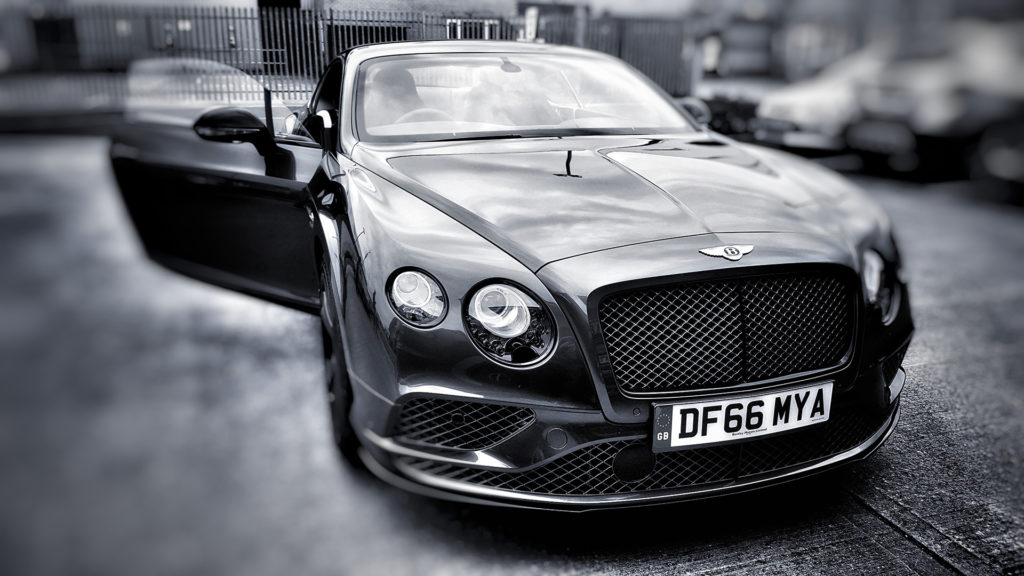 A friend of mine’s husband worked for Jaguar but they were a no go, I contacted AVIS car hire who could happily get us a Jaguar XE for the shoot which was a lovely car for £200 for the weekend. Better than nothing, until they dropped the bomb shell on us….
They couldn’t guarantee the colour. We wanted silver or black but it could have turned up pink so we decided to leave it there….

Katie at SCC suggested we try Bentley Motors as they ran an apprenticeship scheme for the company and they may be interested.

Bentley were happy to be involved and loaned us a Bentley Continental GT Black Edition.

Now we could make something!

The next day we began masking off the area with black curtains and black cloth for the floor I had picked up that day from a wholesaler in South Manchester.
Whilst that took place the car was attended to by a mobile valet to give it a perfect shine.
We set up the turntable and placed wooden braces around the turntable so the car could get on which we thought would take ten minutes at the most.
Three and half hours later we were still at it….
One push of the button though lifted the cars suspension up four inches and we managed to get it on as we edged forwards inch by inch.

The four paddles that held the wheels were milimetres off the floor with cars 2500KG weight, just pushing the threshold of the turntables limits.
With the car dipping forward more than the rear, we used weights in the boot of the car to counterbalance the heavy front and somehow, someway it worked! 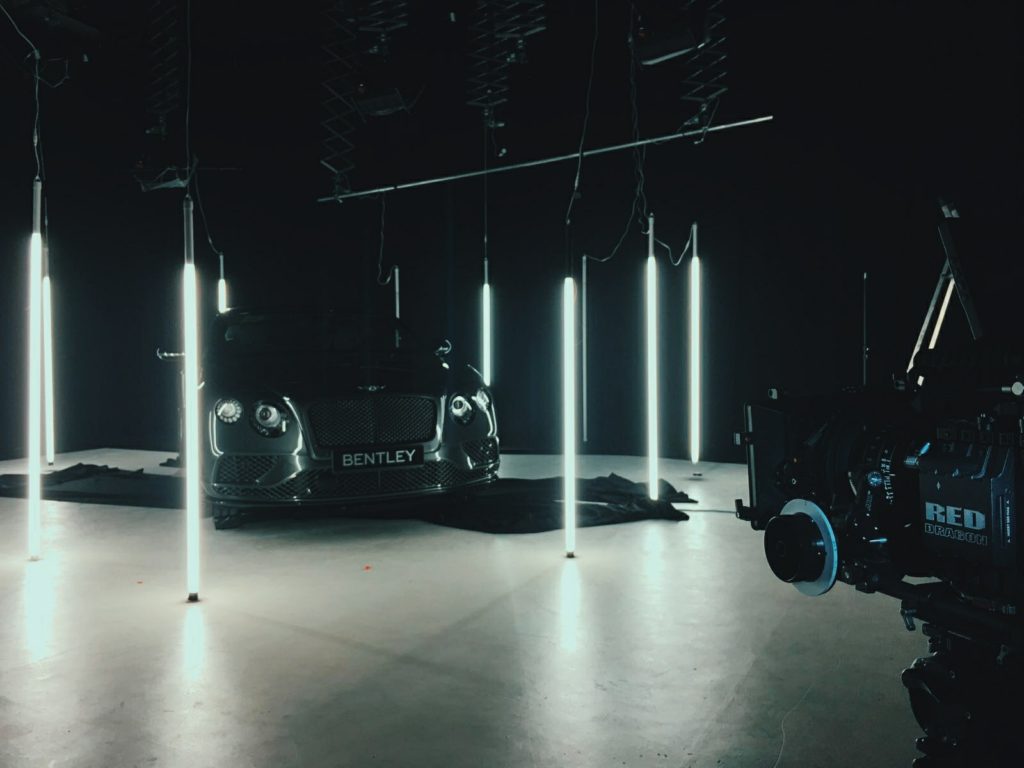 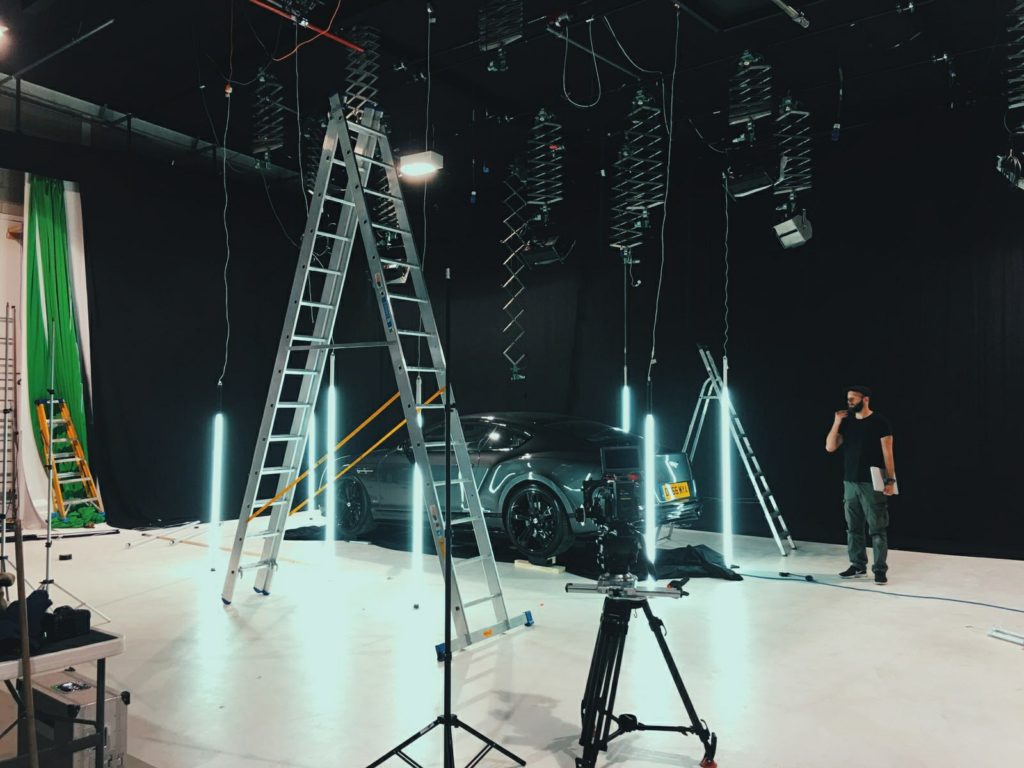 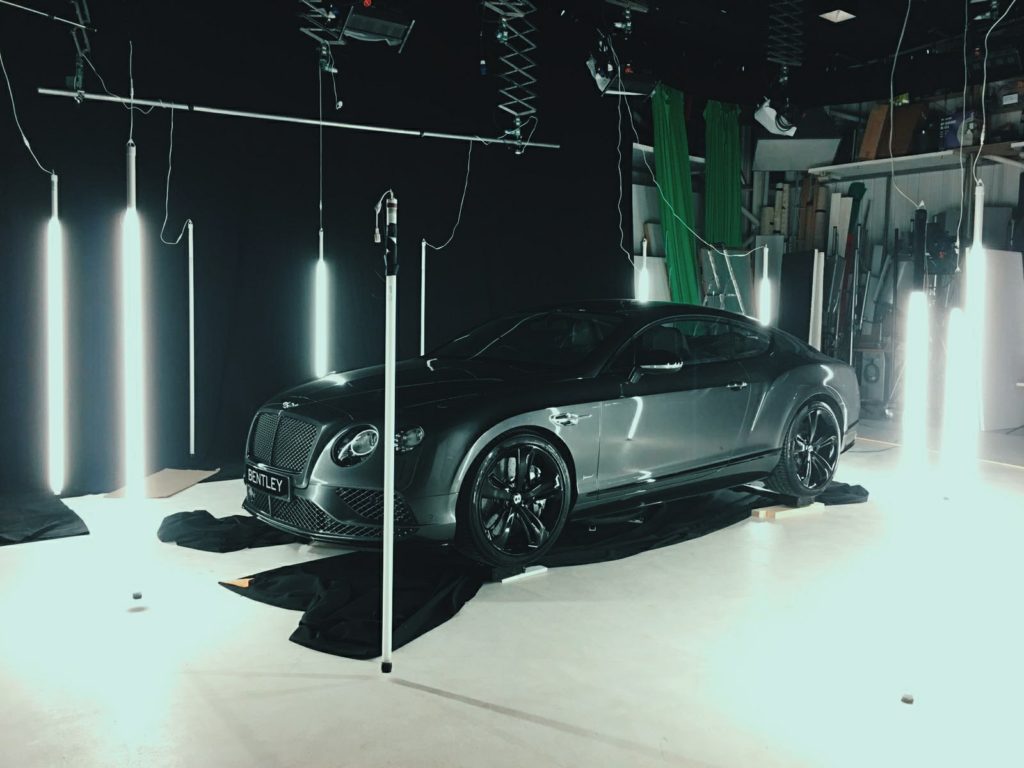 The rest of the day was spend hanging the Encapsulites concentrically around the perimetre of the car so that it could rotate and not hit them but also so they looked symmetrical from every angle which we achieved with a star configuration. 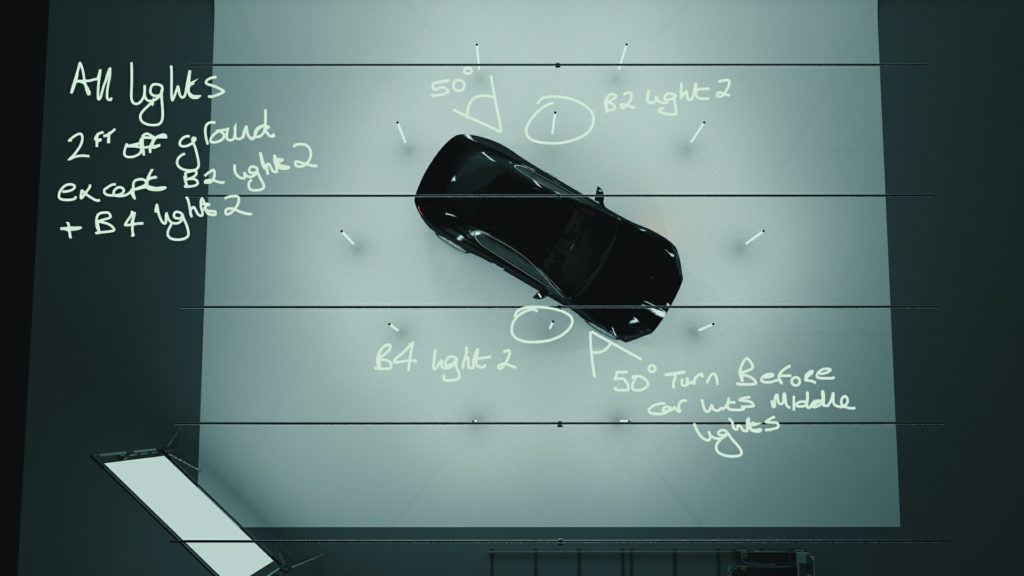 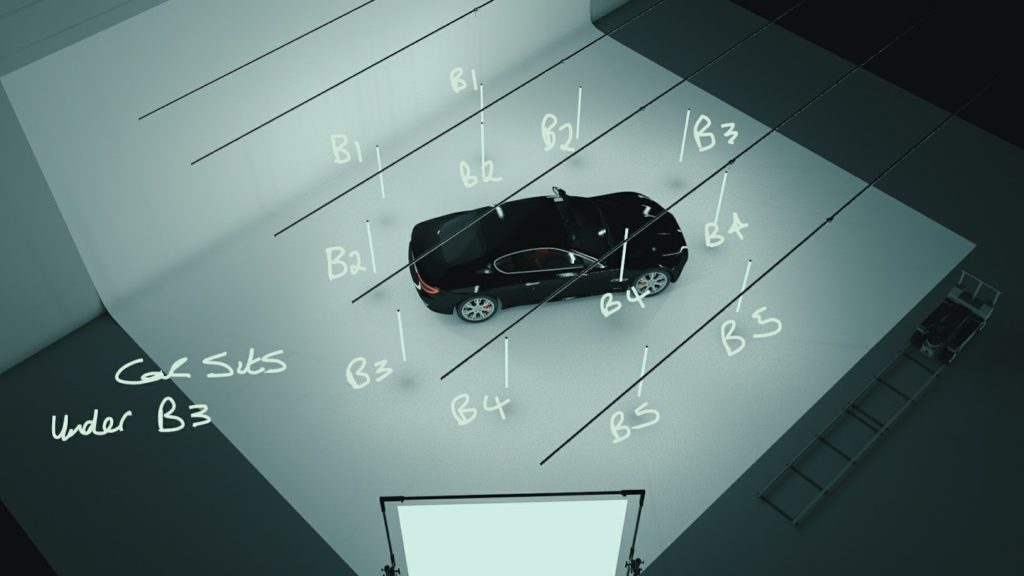 The lights were hanging from fishing wire attached to beams in the ceiling which Mike had pre-planned in Cinema 4D with a plugin called cine-design. With lots of help from the sliding carriage in the roof and our Gaffer Dan Tunstall, we were totally pre-lit. 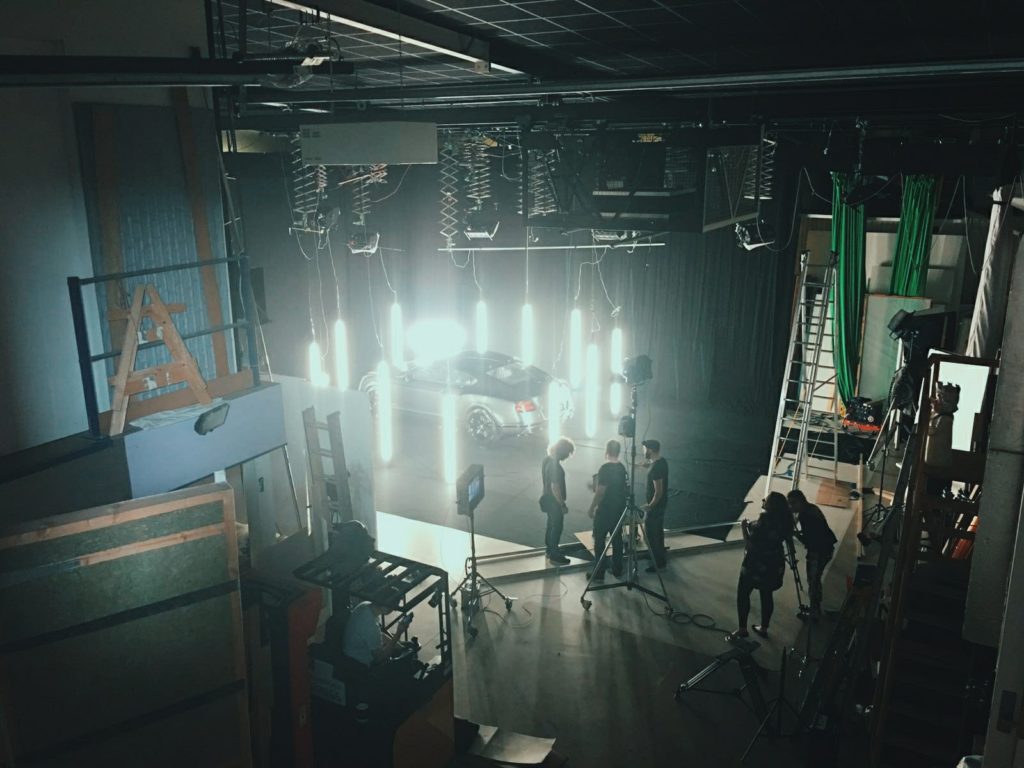 We all arrived at Big Shed at 8am to make a few adjustments to the lighting, Mike set up a DMG Lumiere light behind the Bentley to give it some Rim, with a Rayzr 7 300 giving us some fill for the roof and bonnet.
We also printed off and cut out life sized images of the Bentely ‘B’ for the centre of the wheels as they were completely off axis and it made for a tidier image…
far more easy than trying to raise the cars wheels one by one and rotating them into place…. 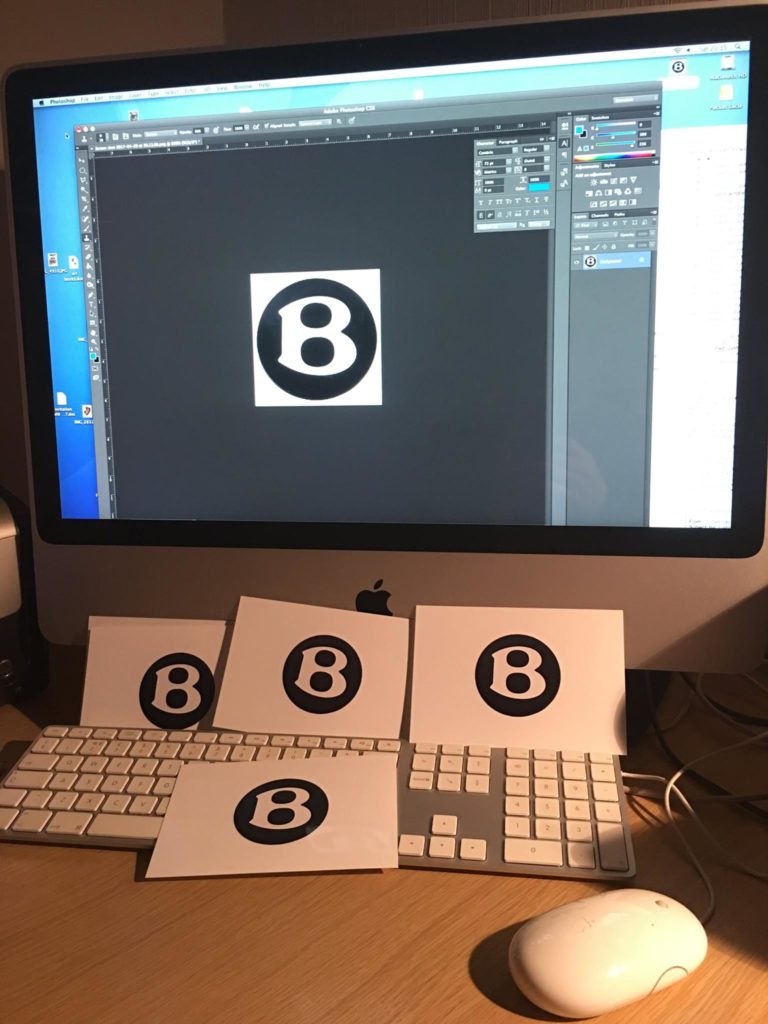 Once the lights were all in place the shoot itself was easy.
The car just span and we did passes of the vehicle moving ourselves on a dolly past the light and counter rotating with the car.
Every shot got us 360’s of the car so we only ever had to do four setups in the whole day; two wides at a 90 degree angle to each other and a close wide low in front of the cars front grill. Also a setup with the car static for some interior shots.
Each setup we used 5 separate lenses, 24mm, 50mm, 85mm, 135mm.
In total we had a 2 day shoot, 75% of which was prelighting and 25% shooting….

We shot on my Red Epic Dragon with the Canon Cine Primes, we had managed to get a set of Sony Cine Altas from Media Dog but after an A and B test, realised the canons much sharper on the wide angle, also the light flare looked better too.

One issue we had to contend with was dust, with every pass more dust alighted on the car and in between each lens change we had to clean it off as well as the car acting like a mirror for every fingerprint in the high contrast lighting.
Buffing it down became a constant job.

The two students Amelia and Flick from SCC were given roles as 2nd assistant camera roles to Leighton Cox-1st AC and learned a great deal about lenses and cine camera setups. They also caught a lot of behind the scenes images for us. 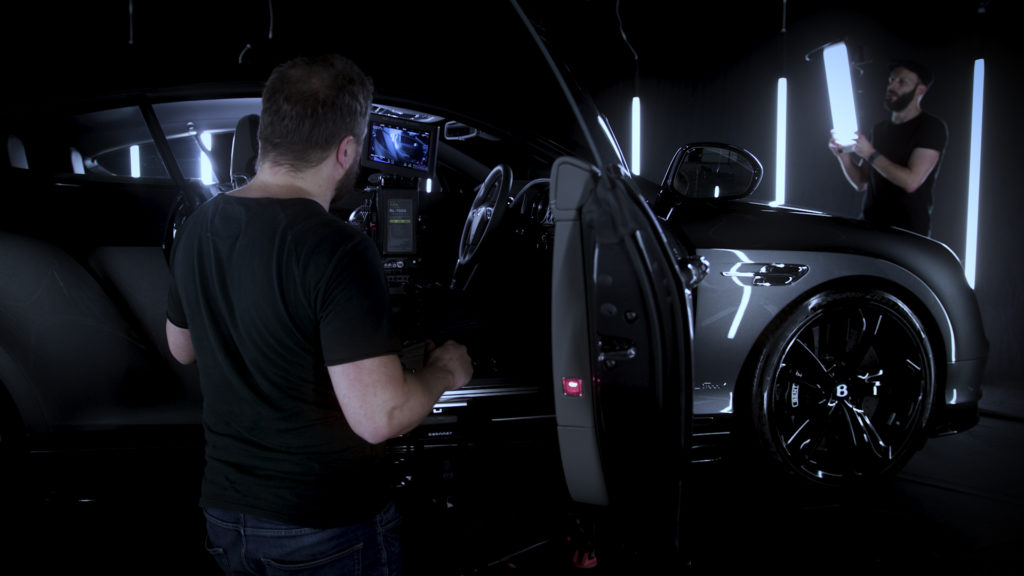 We ended the shoot with some shots inside the vehicle. As we couldn’t rotate it because of the camera-tripod right in the cars open doorway we decided to place one of the Encapsulites on a C-stand and place that on the very same camera-dolly we had been using and rolled it past the car windows as mike made handheld passes with the DMG Lumiere light in front of the car.

We wrapped after four hours of shooting and returned the next day to get the car out of there… this time…. the car came off the turntable in five minutes….
And after a brief removal of all the black cloth and collapsing the turntable Big Shed was clean as a whistle and it was like we were never there…. 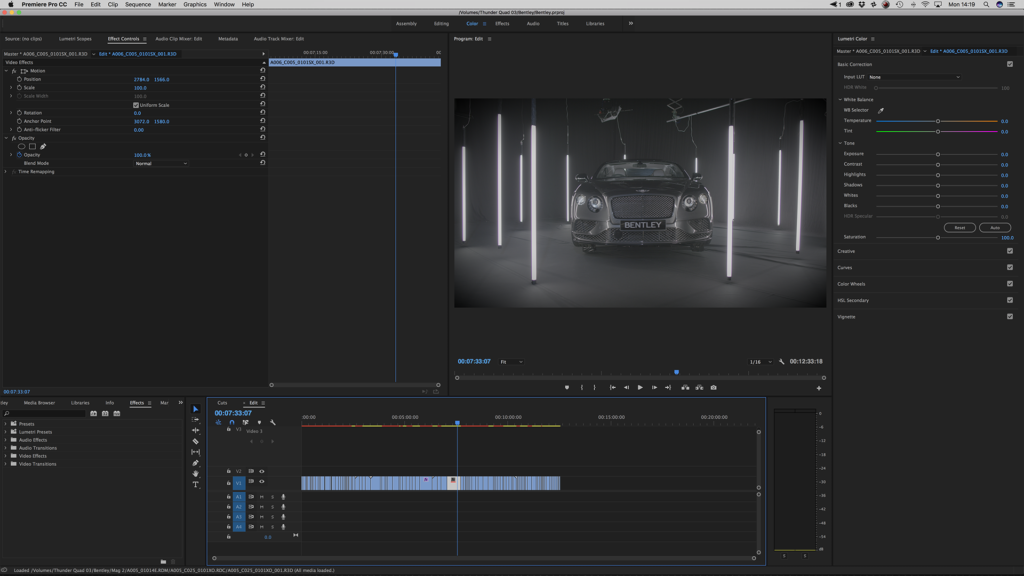 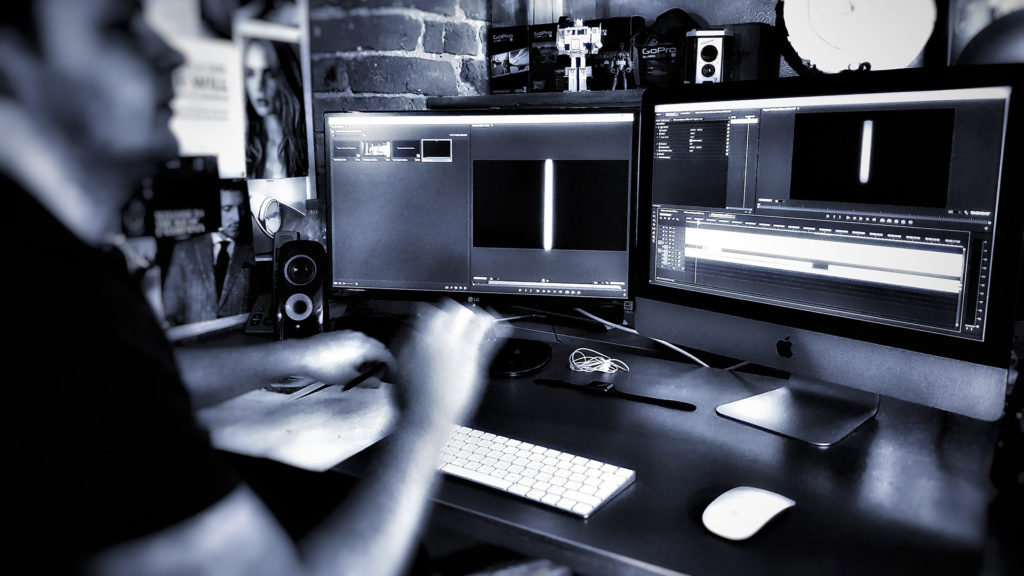 Standby Productions whom Mike had recently began working for were interested in representing me as a director and also getting involved with the Bentley advert, they believed they could bring something to the table in terms of post production so we let their main post guy, Jack Warman take the advert on and he turned round a fantastic edit and managed to black out our surroundings and do some incredible work on the singularity concept using digital mirror effects and also a very terminator 2-esque cool blue grade.

They also replaced all the lights with digital After Effects ‘sabers’ so the car could be rotoscoped out of it’s environment making it much easier to darken our background.
We also added a little light smoke from stock smoke footage around the car to give the whole thing a bit more depth, it also helped make it seem more real and less synthetic.

Giovanni Degli Esposti our VFX guy came on board to to do a little digital cleanup on the car itself; removing tiny imperfections on the body and the streaked flares from the windows whenever they passed a light (You can only clean a car so much… and this is why most car adverts use a CGI car, so it is totally spotless, we did it the old fashion way.)

Example of shot creation from original footage to final grade.

Music was created and mastered by my long term collaborator friend Andrew Henderson, with a brief of Daft Punks Tron, a church organ and Vangelis’s Blade Runner. It also received several different lengths for different cuts of the commercial 1.35, 1.00, 0.30.

A huge thanks for everyone who got involved and supported this shoot including Justin at Big Shed, Dan Tunstall, Leighton Cox and Craig Murfin for his Behind the Scenes shooting. Also Katie at SCC and Bentley Motors Ltd.

Take a look at the final behind the scenes making of our Bentley Spec commercial.